Insulflex® Saves the World in 72 Hours or Less! 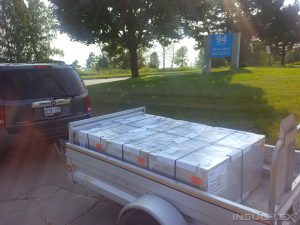 Custom Made Emergency Fireblankets – Designed, built and delivered in 72 hours.

On Wednesday afternoon in late August 2015, our client services team received a call from a Vancouver based supplier of control systems for Natural Gas pipelines. One of the largest forest fires in history was expanding out of control in the Pacific Northwest USA. And since fires don’t respect borders, it was threatening to cross into Canada, right where our primary natural gas pipelines and pumping stations where located. The pipeline operator estimated the fire would arrive on Sunday. So a complete fire protection system had to be installed by Saturday morning.

That didn’t leave us much time.

We took all the application parameters and our design team got to work. We designed a series of 6 large fire protection blankets utilizing Nomex and Kevlar fabrics and our proprietary multi-layer emissive technology to reflect the radiant heat and protect the pumping and control systems. We submitted a quote later that afternoon and confirmed an order on Wednesday night. We had to ship by Friday night for Saturday morning delivery on the other side of country, 3500 km away.

Now the real work began. Our fabrication team had been part of the design process so they knew exactly what had to be done. Our fabrication manager organized her team, creating an overtime schedule to complete the blankets into the night to be ready by late Friday afternoon. But getting a carrier to confirm delivery to the West Coast of Canada by Saturday morning was not so easy, especially on a Friday afternoon of a long weekend. Quite frankly, we had trouble getting anyone to even pick up the phone. So we called Air Canada, who confirmed a flight from Toronto to the West Coast at 11:30 pm , provided we could get the goods there by 9:00pm. Unfortunately by this point, the couriers were closed and trucks were gone. And the shipment was 3 large cartons weighing almost 800 lbs. A little too large to put in the back of a car.

ADL Insulflex management stepped in, with our VP his own vehicle and trailer to deliver the goods to Toronto Airport on a Friday evening. He arranged the direct flight, and even helped load the boxes at the terminal, to ensure they got on the flight. At 11:00 pm we received a frantic call from our client, informing us they heard the shipment was not on the flight. But our VP had remained at the airport, just to ensure everything went smoothly, and the goods were indeed delivered by 7:30 am on Saturday morning.

Did the fire ever cross the border? Yes it did. And it came dangerously close to the natural gas pumping station, allowing the Insulflex custom made fire protection blankets to offer the needed protection.

Did we save the world? No, just the western part of North America. Another typical day at ADL Insulflex, Inc.